Ever wonder why cats go crazy for catnip?

If you’ve ever seen a cat go crazy over catnip perhaps you’ve wondered what causes catnip to affect cats that way?

Catnip is a strange occurrence among cats, it can alter your cat’s behavior like nothing else! The exact reason why Catnip affects cats in such a weird way remains mostly a mystery. There is however much that we do know about cats and catnip even if we don’t have all the details!

Catnip is scientifically classified as Nepeta Cateria and is a perennial herb from the mint family. Also known as “cat mint”, catnip is indigenous to Europe but has been exported and is now found all over the world!  Believe it or not, there are actually about 250 species of catnip! 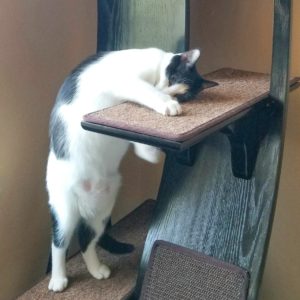 Catnip is often found in a bottle or spray form because the active ingredient in the plant is actually an oil which comes from the leaves of the plant! The technical name of this oil is Nepetalactone (just in case you’re ever on Jeopardy). Even though catnip is closely related to many plants that humans are familiar with like basil and oregano, catnip is the only one that cats go crazy for!

Cats get “high” from the oil in the leaves called nepetalactone which binds to receptors inside a cat’s nose, stimulating sensory neurons leading into the brain. Catnip affects approximately half of all cats with reactions ranging from complete insanity to some cats not reacting at all. Catnip is considered to be non addictive and completely harmless to cats although the reaction can be quite entertaining.

What determines whether or not a cat will react to Catnip is a genome that is inherited (or not inherited as the case may be) at birth. Kittens, regardless of whether or not they carry this genome, do not react to Catnip until reaching about 3 or 4 months of age. Older cats are also more likely to have a diminished or non-existing reaction to Catnip, which leads scientists to believe that the Catnip effect is based at least partially on sexuality and that the reaction may be something like an aphrodisiac.

The domesticated house cat is not the only cat that may be affected by Catnip! Larger felines such as the bobcat, lynx, tiger, and even lion are known to react much the same way the common house cat would. While catnip can act as a stimulant when a cat sniffs it, it can also act as a relaxant if ingested. Therefore, you may see a nearly opposite result depending on whether your cat chooses to eat the catnip or merely sniff it (the more typical behavior)! 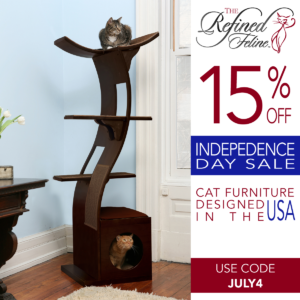 Independence Day Sale! Get 15% off until 7/5/20 with code JULY4. Excludes sale items, replacement parts and accessories, and Crystal Clear Lotus.

Free ground shipping on orders over $60 within the continental US. Orders outside the continental US will incur an extra fee. Contact Customer Service with postal code for additional costs. Free shipping valid on products only, accessories and replacement parts not included.